As warned in my last recap, my overwhelmingly active social life (aka I actually did things for once because my best friend was visiting) prevented me from putting up this recap in a timely fashion. However, knowing I’m going to miss recapping Sophie’s Bachelorette season (devastating – I want to see if she’ll be on Gogglebox talking about her own dates) because of my work commitments, I wanted to do hometowns out of a desire for completeness.

Turns out her special place is Movie World, and it must be approximately 6am because they have the place to themselves. Tara + rides is a great chance for another long session of Tara shrieking excitedly. I genuinely believe her finale montage could just be her eating phallic food and screaming. As they walk around the park he feels like he’s getting a preview of what life with Tara would be like. As she grabs his arse.

Boy receives fair warning about her brother Troy, but nonetheless it’s a bit of a surprise when they’ve only seemingly been there about 30 seconds and have met a series of charming small children when he drags Matty out for a chat around the barbecue – which seems like a dangerous place for an interrogation.

It’s not really too drastic. Although Troy cuts an intimidating figure in his backwards cap, he wants to know the same thing all the families want to know – will he pick Tara? None of these people are apparently familiar with the rules or the format of the show because of course the Bachie is strictly verboten from talking about love or who he’ll pick.

Anyway when Matty says he doesn’t know yet who he’ll pick, Troy responds with a deadpan ‘Liar’, and all the producers high-five themselves for getting their dramatic promo shot. Apart from that, everyone’s nice. In conversation with Tara’s sister, Matty calls Tara an ‘all-rounder’, which sounds the kind of thing my teachers would put on my report cards because I wasn’t particularly good at anything.

When she tells him ‘I could really see myself falling in love with you’ as he leaves, Tara starts a fascinating trend of  the girls not telling The Bachie that they’re falling in love with him at hometowns. This is absolutely standard practice in series gone by, but I have a sneaking suspicion all of the ladies spent some time studying Nikki’s journey in Richie’s series. If you’re not familiar with her, she fell for that dropkick hard, and Australia was left heartbroken after he chose Stage Five Clinger Alex Nation. At hometowns, Nikki actually went one step beyond Alex – admitting to him ‘I’m totally in love with you’ versus Alex’s ‘I think I’m falling in love with you’. And while Tara probably holds emotions deeper than she reveals to him (she starts crying after he leaves, with her voiceover telling us ‘I’m not scared to fall in love. I’m scared of getting my heart broken, I worry that he won’t fall in love with me back’), it’s an interesting change in the usual formula of the show.

Matty’s off to Florence’s ‘hometown’ of Melbourne next, where he will be mildly offended that Florence’s entire family did not fly over from Holland. As a substitute, they ride some bikes for fifty metres for a ‘Dutch picnic’, which as I was disappointed to find out, is not a sexual innuendo but just a bunch of cheese. Florence assures as that ‘friends are the family you choose’ so today she will be introducing Matty to two of her close friends. She chooses one of her most ‘direct’ friends, presumably because she realises she looks exactly the same as Tara and, like Highlander…

Seriously, I feel like the Twittersphere have been completely ignoring this while they repeatedly assert that Georgia and Laura look exactly the same because they have brown hair… 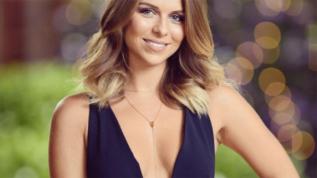 Anyway, if you know you’re going to be making way for your doppelganger that’s likely to actually stick in the country, you might as well throw a few parting shots the Bachie’s way through your intimidating friend. She even goes out of her way to make him nervous on the way in the door. In addition, she makes him stop holding her hand during the conversation (‘Let go of my hand…it’s okay’). Honestly, Florence’s complete and utter Fuck It I’m Hanging Out With My Friends attitude during this hometown might actually be my favourite thing.  At the end she tells him ‘I feel like I’m on my way to falling in love with you’ and he just responds with blank look and straight on kiss. It’s so awkward that they probably should have just high-fived.
Actual footage:

Now it’s off to rainy South Australia to see Elise, Totally Elise. They walk around getting wet but not in that way for a bit before Matty is finally allowed to see his beloved Phil, who he refers to as ‘Captain Phil’. He is thisclose to giving Phil the flowers he brought, inclined as he is to give blooms to people he’s in love with. Matty soon realises that he has a crush on Elise’s whole beautiful, white-teethed family. Even Elise’s Mum, who sneaks off to drink wine in the kitchen and drag Matty for his potato-mashing abilities. Elise smiles her face off the entire time – she’s so happy to have Matty together with her family. I mean, I know some families like this. When Matty says Elise’s family is something he’d ‘like to recreate’, it’s a bit odd, but I get it. Elise’s sister doesn’t seem like a nightmare tyrant, unlike Matty’s sister. But now I’m just sad that this entire lovely family is going to be heartbroken when Matty dumps them.

How dare you Matty?

Now we come to the best part of the episode, for it is time to meet the Best Dog In Sydney.

Buster is Laura’s three-legged rescue dog and an actual angel on earth, running around on the beach. This is where Matty meets them, and I quietly note with some sniggers that Buster doesn’t come when Matty calls, but when Laura says to go. Good instincts, Buster (of course, being a sook, Buster immediately starts pumping Matty for belly rubs).

Never forget, by the way, how Matty’s sister panicked at the idea of Free Babysitting Service Matty J leaving the state. It’s incredibly convenient that Laura lives in Sydney. Matty even mentions this: ‘It’s nice to be in your hometown…which is also my hometown’

They turn up some relos place/rented property and I’m personally devastated to see that this masterpiece isn’t framed somewhere:

Buster isn’t there either so the rest of it all is pretty dull. Nana drags Laura a bit for bringing a few guys home over the years (Laura tells him at the end that she hasn’t brought a guy home in years). Her sister gives Matty a light grilling, not too bad but it’s still beautiful to see his face fall over the course of the episode every time it doesn’t fly when he tries to give a charming smile instead of an actual answer. When Laura has  solo chat with her sister, she’s stressed out – does she put herself out on a limb letting him know how she feels, and potentially get hurt, or does she let him read between the lines? Oh yes, she definitely watched Richie’s season. Her sister urges her to go balls deep on this thing, but evidently she chooses the latter. As he leaves, they have a pash and a slightly awkward conversation:
Matty: Are you 100% certain?
Laura: Are you 100 certain? …You can’t answer. You know I want this.
Matty: But are you 100% certain?

She responds in the way most people would to a man who can give them no guarantees and who also has three other girlfriends: ‘Don’t do that, not if you can’t say the same thing back’. As much as I find it entirely understandable, at some point in finale week, Laura’s gonna have to go balls deep on this thing, because we know Tara will.

Apparently you’re not allowed to compare notes on hometowns because the pre-rose-ceremony scene is just a montage of the girls drinking wine on their own in different parts of the mansion.

The girls line up and there is the stink of excessive sobriety in the air. Tara stands there with her hands clasped – she appears to be praying. Oh honey. He’s just not worth it. He picks Elise, then Tara. Laura appears to roll her eyes, a little butthurt that she’s been put in the bottom two (BALLS. DEEP). Florence looks vaguely sick because she presumably knows what’s coming. Osher gives Matty a little man-pat as he farewells Florence, meanwhile Tara shouts ‘we’ll see you soon!’ because maybe Bachie is less about the dripping man-candles and more about the friends we make along the way.

A Romantic Realist View all posts by Katie Sparkes