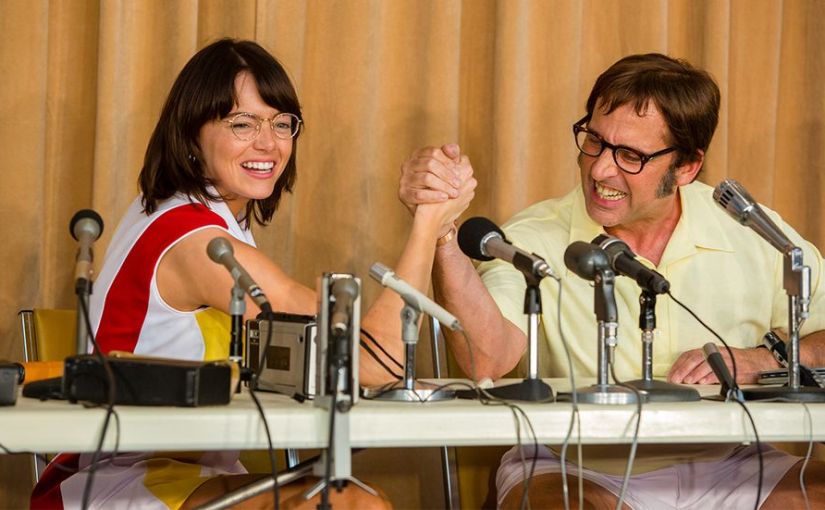 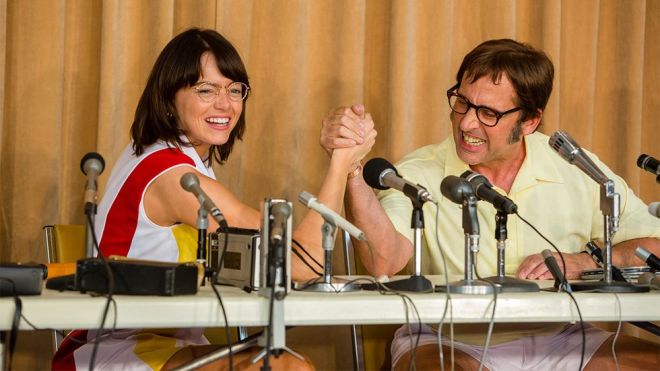 A word of warning to my fellow Aussies: we’re going to have a pretty unique perspective on this movie. And if you care about any queer person in your life, you’re going to find it effects you. Because:
a) We’re currently going through a non-binding postal survey that has essentially turned in to a national referendum on the way LGBTQI people live their lives.

I’ve got to tell you, I had to do a bit of a Wikipedia dive on this one. Margaret Court was never on my radar (even though she has an Arena named after her, my bad), so making her a villain of the piece seemed a little….obvious, after her comments in May this year. But given this movie was filmed over a year before that, I wanted to see what else may have informed that decision. Turns out Margaret Court was raised Roman Catholic and then went full Pentecostal around the period the film is set in, became a Minister in her own church and has used that platform to speak out about gay marriage (and a bunch of other things). Safe to say, she well and truly had form before her comments this year. I’ve heard stories of audiences booing her appearance, however, despite the Lido loading us up on Pimms at today’s preview, my crowd mostly kept it in.

(As an aside, I am so glad they got an Australian actress to play Court, although strangely Jessica McNamee did seem to slip in to a trans-Pacific accent sometimes).

Battle of the Sexes is undoubtedly a story about Billie Jean King, a story about sexism, homophobia, fear, and strength. This is not Steve Carell’s story to tell, and as such he takes a bit of a back seat. I mean, his character is played as such a loser that he sleeps in the back seat of a car. And his son’s couch. Yeah, Bobby Riggs is not doing great at the start of this story. And, with real life being a spoiler again, he ain’t doing too crash hot at the end, either. But he does have an colossally smug period in between beating Margaret Court and taking on King. Carell effortlessly slips in to Riggs’s bravado and showmanship – and no-one that’s ever scene The Office could doubt this.

King is surrounded by a colourful cast of characters as she establishes what will become the Women’s Tennis Association. It kicks off with the Virginia Slims Invitational and nine players, including King and her good friend Rosie Salas. Rosie, played by Natalie Morales, ends up not only winning the tour, she also finds herself  calling the match between King and Riggs, with some oafish white dude holding on to her neck in a way that has never not given me the heebie-jeebies. Also helping establish the Virginia Slims International is Gladys Heldman, played to acerbic perfection by Sarah Silverman. Heldman is shown to be alongside King at the moment that spurns her to move in to a new realm – a pay dispute with a tournament organiser – however their relationship is a little vague. Wikipedia tells me they were essentially colleagues, but the movie had me convinced Heldman was King’s manager, until the moment King asks her husband Larry to tell Riggs she’s ready to bring it on. Whatever their relationship, Silverman trying to shove cigarettes in the hands of these athletes because of the sponsorship deal she’s locked down is a hoot.

King’s relationship with Heldman isn’t the only one the movie futzes. At the centre of this story is King’s queer identity, her struggle as a married woman coming to terms with her sexuality, and meeting a woman who could change everything (all the while being observed by the judgey judgey eye of Margaret Court, and casually being cheered on by seemingly-not-at-all-in-the-closet Alan Cumming, assisting the team on wardrobe).  King meets Marilyn Barnett (Andrea Riseborough) in a hairdresser’s chair, and what follows is a brief but intense love affair, clearly seen and comprehended by King’s husband Larry (Austin Stowell). Billie clearly knows what she wants, and the impossibility of having it. The movie ends on a gentle note, with Cummings’ character telling her that one day things will change and they will be free to love who they love. The postscript on the movie tells us that eventually King did move on from her marriage to Larry, and began a long-term relationship with a woman named Ilana Kloss. She and Larry are still buds.

What the movie fails to mention is that King and Barnett (who is still present at the end of the movie) were in a relationship for many years after this. In fact, King was only dragged out of the closet against her will in 1981 when Barnett sued her for ‘palimony’.

On the theme of identity struggles, this movie really doesn’t know what it wants to be. It contains many clear dramatic elements, in King’s struggle with her sexuality and in the battle for women to establish their place in a male-dominated arena. Hidden Figures was somehow much more accomplished at balancing this with comedic elements. Battle of the Sexes takes a broader approach. Fred Armisen is there as the man shilling bogus vitamin pills (and possibly speed?) to Riggs. Riggs’s therapist, who’s there to help him with his gambling problems, has a blackjack debt to him. These ridiculous elements certainly circle around Riggs (altogether laughable himself), and it makes it incredibly difficult to mesh in to King’s dramatic storyline. Here we have a Joke Person up against a Real Person.

But of course, these movie isn’t just a fumbled mesh of comedy and drama. Even though it’s a movie supposedly about tennis, the ‘sports’ part felt reasonably absent until the last act – the match between King and Riggs. And this is where I suspect we find there’s actually a pretty decent sports movie hidden in here. Because the promotion has made no attempt to hide the outcome (and why would they?), but we can feel real stakes and real tension. As someone who is not aggressively in to tennis, it reminded me of just how thrilling the game can be to watch. And when you can know the result and still get that invested? That’s some pretty good film making. Someone in my audience clapped when King got a key shot. The woman next to me cried when she won. I don’t think the Pimms had a lot of influence on this, either.

Do I need to tell you that Emma Stone is fantastic? That she shows vulnerability and strength in equal measure and you will want to high-five the heck out of her while gently reminding her that her husband seems like a really nice guy? That she will make you wish you had witty bon mots and not just pure blinding rage next time someone says something sexist to you? And that she will make you ache, ache for everyone who sees the cruelty and the judgement surrounding them and quietly retreats in to secrecy, waiting for the world to change.

If only it had changed a little more.

A Romantic Realist View all posts by Victorian Values