A funny thing happens when you approach 30. You’re kind of forced to take stock of your life. However, I’m not someone who worries about goalposts. I don’t really believe in marriage, although I’m a big fan of weddings (people are forced to give you presents and tell you that you’re pretty? HELLO). I’m a very happy aunty who’s never wanted kids. I’ll buy a house either when I’m partnered up or I can afford one on a deeply average income… while somehow still affording rent because hell knows I’m not moving back to the South Coast of NSW to live with my parents.

So I don’t believe in goalposts, but I do have hopes. And as we’ve previously established, I am a romantic. I may not want tradition, but I do want a companion to go through this dumb thing called life with – and not just so I can afford a house. I found myself approaching 30, living in a small coastal town, surrounded by my friends, who are the greatest people on planet earth, but also apart from my friends in some ways. Because every person in my group was in a committed relationship, and I realised I was beginning to live their settled lives, when I myself did not have any desire to settle in to the life I had. I was living in an area I had almost no chance of meeting someone I had things in common with. So, I had a choice. I could move to Sydney, where I’d worked for 8 years, and which I hated, or I could just call time and move to Melbourne, which I loved, and where a beautiful nephew was himself about to be born. It was a tough choice (see aforementioned greatest people on planet earth), but one where I saw a lot of opportunity. I’d connected with so many people in Melbourne before in my life. This is where it’s going to happen to for me, I thought.

So, what’s happened since then? Well, I was on Tinder for a while last year. Both half-seriously, and then continuing my Tinder Trends series while I was unemployed. Then I got a job and got exhausted by Tinder. Ugggggh it’s so awful on there guys. The trends are never good. I dipped my toe in Bumble and mostly found more of the same. But here’s the thing: I have met a whole bunch of awesome – generally straight – women in Melbourne. Outside of work, I have met no men who are not boyfriends of said women. I’m not a big believer in office romances, partly because I’ve seen things go wrong and also because my mother met both her husbands at work (yep) and both of those were hellllla ill-advised. Also I am a big weirdo at work and pull a lot of faces at my desk while swearing at my computer. I don’t think it’s charming. ANYWAY. What I’m saying is I am not organically meeting people who I would date here in Melbourne, the land of opportunity.

Last night as I was standing in the shower, where I do my best thinking, I was pondering that clearly I am going to need to download Tinder in a couple of months when I go to Europe (goodbye, probably about a fifth of a non-existent housing deposit for the mortgage I could never service and would never get). Not because I am planning to casually fuck my way across the Continent, but because of my natural human curiosity about the people I will in no way be talking to in public spaces, because I actually care about my safety. I just…want to know what my options would be, if I were local.

But then, of course, you know where this is going. Because in the next breath, I realised I wasn’t even finding out what my options are now. Where I live. Nothing makes me wildly keen on the idea of dating (shaving my legs? Trying not to swear as much as I actually do? Praying I don’t get murdered?), and I really don’t mind waiting, but at some point I’m probably going to have to realise that the right person for me is not going to appear in my lounge room while I’m watching Younger.

If Silicon Valley could get on with *that* app, though…

….that no-one asked for.

You’ve heard of Bumble, right? It’s kinda like Feminist Tinder, in that ladies have to make the first move to make contact when they get a match, or that match damn well disappears. The whole thing kinda freaks me out, because I already spend 100% of the time thinking I come off as too thirsty, but nevermind, I wasn’t there to make matches! I was there to collect some of that sweet sweet data.

This post is intended as a sequel to my Tinder Trends series, but particularly the epilogue where I examined age-related data. Unlike The Big Study, I only collected data on 100 profiles (as I was hoping to have it done around PAX, but then I came down with an almighty case of PAX pox and did not want to think about men or romance or having a body). I set the parameters the same as The Big Study, however, searching for men between ages 25-40 within a 50km radius. I  also collected a few extra data points that were of interest to me.

First things first! Bumble did not want me to be a cougar. Well, not so much…

This is good, because I have spent enough time with men in their twenties to last two lifetimes! More than 50% of the men Tinder showed me were in the 25-29 age bracket, whereas 41% is a much more manageable number of men I almost certainly wouldn’t date unless I started to have some sort of emotional crisis. Thanks, Bumble. There is always the chance that Bumble’s user base just skews a little older, or that the men on there set their age preferences a little closer to their own actual age. 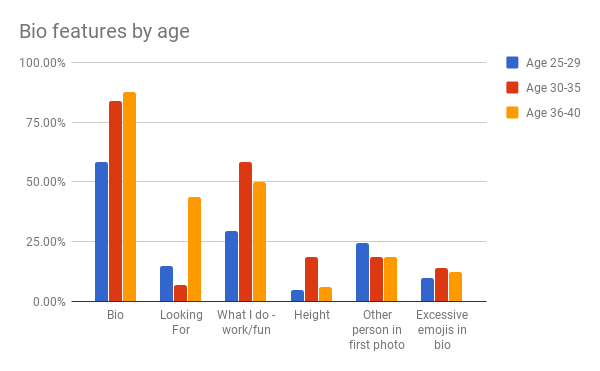 What ho, 30-35 year old men. Why is is that you’re 12% more likely to mention your height (my old bugbear), than, say, what you’re looking for? Once again, the older cohort were WAY better at expressing this than the young dudes. One of the biggest changes is the drop in the youngest age groups even having a bio at all. On Tinder, over 70% of guys in the 25-29 age group had something – anything – in their bio. Even if it was rubbish. Even if it was a bunch of emojis (seriously, some of these dudes really need to reconsider the picture-is-worth-a-thousand-words thing). But in this set it was only 59%. And I gotta say – 41% not having anything to say? It’s not good enough.  In the current environment where women are having to think about sexual harassment and assault literally every day, men should consider themselves lucky that a woman might even consider going on a date with them without a full police check. If they’re not going to offer any information about themselves, then they shouldn’t be surprised when the inevitable future comes about:

In this dataset I also picked out what is actually a photo feature, but it it got thrown in there because it’s a Y/N rather than a numbers thing. If you put another person in your first photo….

Don’t make it a magical mystery tour to find out which one you are! I came across a guy and ALL of his photos were group photos. No-one is matching with a dude just because he has a wide variety of friends who drink in a vast array of foreign locations.

Across the board, Bumble men actually slipped in to my cliches more firmly than Tinder men. There was a higher average number of travel pictures, of animal photos, SO many more gym selfies (HELLO older dudes who want to show off those gainz), and and a heck of a lot more bar photos. But additional cliches emerged quickly too, cliches that only emerged about halfway through my Tinder research so I didn’t have an opportunity to factor them in to my data. I live in Melbourne, so no great surprises that apart from weddings, there’s a lot of photo ops when you suit up to get wasted at the races. 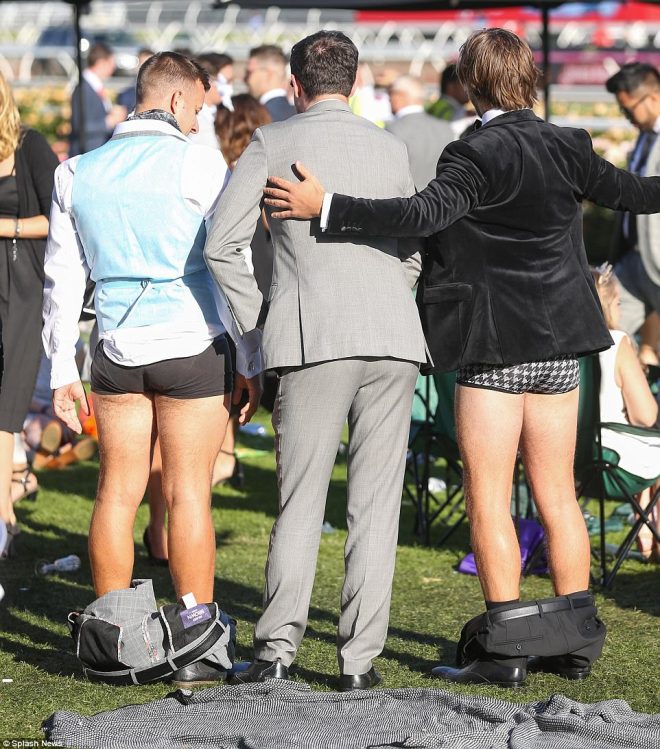 Don’t put that photo on your dating profile you idiots

Guys also really want you to know they ride a motorbike. I don’t know. Judging by the age data it doesn’t seem to be linked with mid-life crises, motorbike dudes in my unfortunately vast experience just really. want you. to know. about their motorbike.

My new bugbear is the small child accessory! This is frequently accompanied by a vehement disclaimer that it’s not their child, but a niece or nephew. I’ve got a new idea! If you’re a parent, just disclose it. You don’t need a photo. It’ll make some nice content for your sparse bio. If you’re not a parent, don’t put a child in your online dating profile, unless you can also provide proof that their parents permit you using their kid in the pursuit of sex. And even then, probably don’t do it?

However, it’s not too prevalent. About ten per cent of profiles pulled out the small child accessory. About the same percentage of profiles that did not feature a single photo of the subject’s face in full.

So what are the overall takeaways from this Bumble vs. Tinder exploration? Well, just putting the power in women’s hands to initiate communication might be a slight improvement on Tinder, stemming the onslaught of dicks that can be experienced on such a platform (I mean, I presume that happens. My experience on Tinder is generally of matches that never go anywhere, but when I was on there I also explicitly stated I didn’t want to see anyone’s penis in my bio). But it doesn’t follow that the pickings are all that much better. The data actually tracked very closely with Tinder, when it came to how many people had something to say for themselves, how many were annoying cliches, and how there was a lot of content that didn’t quite fit in to easy categorisation. Is it nice to know that this app was showing me people a little closer to my age? Yes, but that can be controlled with preferences.

Want to know what the main difference is? You can switch off horndog mode (which I did when PAX rolled around) and switch to Bumble BFF. It’s just intended for making friends. As someone who’s still finding her feet in a new city, and has travelled solo, this idea appeals to me way more than talking to strange men on the internet. But unless you think it’s okay to choose friends on appearance alone…

You need to have a goddamn bio.