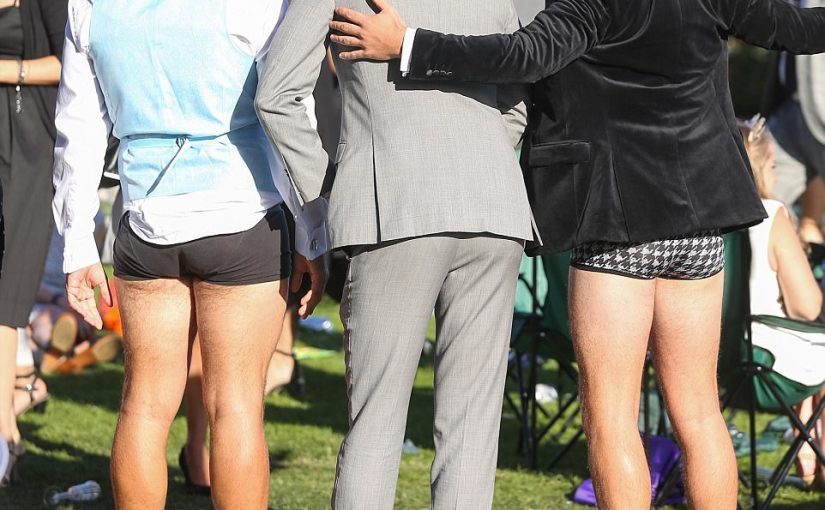 ….that no-one asked for.

You’ve heard of Bumble, right? It’s kinda like Feminist Tinder, in that ladies have to make the first move to make contact when they get a match, or that match damn well disappears. The whole thing kinda freaks me out, because I already spend 100% of the time thinking I come off as too thirsty, but nevermind, I wasn’t there to make matches! I was there to collect some of that sweet sweet data.

This post is intended as a sequel to my Tinder Trends series, but particularly the epilogue where I examined age-related data. Unlike The Big Study, I only collected data on 100 profiles (as I was hoping to have it done around PAX, but then I came down with an almighty case of PAX pox and did not want to think about men or romance or having a body). I set the parameters the same as The Big Study, however, searching for men between ages 25-40 within a 50km radius. I  also collected a few extra data points that were of interest to me.

First things first! Bumble did not want me to be a cougar. Well, not so much…

This is good, because I have spent enough time with men in their twenties to last two lifetimes! More than 50% of the men Tinder showed me were in the 25-29 age bracket, whereas 41% is a much more manageable number of men I almost certainly wouldn’t date unless I started to have some sort of emotional crisis. Thanks, Bumble. There is always the chance that Bumble’s user base just skews a little older, or that the men on there set their age preferences a little closer to their own actual age.

What ho, 30-35 year old men. Why is is that you’re 12% more likely to mention your height (my old bugbear), than, say, what you’re looking for? Once again, the older cohort were WAY better at expressing this than the young dudes. One of the biggest changes is the drop in the youngest age groups even having a bio at all. On Tinder, over 70% of guys in the 25-29 age group had something – anything – in their bio. Even if it was rubbish. Even if it was a bunch of emojis (seriously, some of these dudes really need to reconsider the picture-is-worth-a-thousand-words thing). But in this set it was only 59%. And I gotta say – 41% not having anything to say? It’s not good enough.  In the current environment where women are having to think about sexual harassment and assault literally every day, men should consider themselves lucky that a woman might even consider going on a date with them without a full police check. If they’re not going to offer any information about themselves, then they shouldn’t be surprised when the inevitable future comes about:

In this dataset I also picked out what is actually a photo feature, but it it got thrown in there because it’s a Y/N rather than a numbers thing. If you put another person in your first photo….

Don’t make it a magical mystery tour to find out which one you are! I came across a guy and ALL of his photos were group photos. No-one is matching with a dude just because he has a wide variety of friends who drink in a vast array of foreign locations.

Across the board, Bumble men actually slipped in to my cliches more firmly than Tinder men. There was a higher average number of travel pictures, of animal photos, SO many more gym selfies (HELLO older dudes who want to show off those gainz), and and a heck of a lot more bar photos. But additional cliches emerged quickly too, cliches that only emerged about halfway through my Tinder research so I didn’t have an opportunity to factor them in to my data. I live in Melbourne, so no great surprises that apart from weddings, there’s a lot of photo ops when you suit up to get wasted at the races.

Don’t put that photo on your dating profile you idiots

Guys also really want you to know they ride a motorbike. I don’t know. Judging by the age data it doesn’t seem to be linked with mid-life crises, motorbike dudes in my unfortunately vast experience just really. want you. to know. about their motorbike.

My new bugbear is the small child accessory! This is frequently accompanied by a vehement disclaimer that it’s not their child, but a niece or nephew. I’ve got a new idea! If you’re a parent, just disclose it. You don’t need a photo. It’ll make some nice content for your sparse bio. If you’re not a parent, don’t put a child in your online dating profile, unless you can also provide proof that their parents permit you using their kid in the pursuit of sex. And even then, probably don’t do it?

However, it’s not too prevalent. About ten per cent of profiles pulled out the small child accessory. About the same percentage of profiles that did not feature a single photo of the subject’s face in full.

So what are the overall takeaways from this Bumble vs. Tinder exploration? Well, just putting the power in women’s hands to initiate communication might be a slight improvement on Tinder, stemming the onslaught of dicks that can be experienced on such a platform (I mean, I presume that happens. My experience on Tinder is generally of matches that never go anywhere, but when I was on there I also explicitly stated I didn’t want to see anyone’s penis in my bio). But it doesn’t follow that the pickings are all that much better. The data actually tracked very closely with Tinder, when it came to how many people had something to say for themselves, how many were annoying cliches, and how there was a lot of content that didn’t quite fit in to easy categorisation. Is it nice to know that this app was showing me people a little closer to my age? Yes, but that can be controlled with preferences.

Want to know what the main difference is? You can switch off horndog mode (which I did when PAX rolled around) and switch to Bumble BFF. It’s just intended for making friends. As someone who’s still finding her feet in a new city, and has travelled solo, this idea appeals to me way more than talking to strange men on the internet. But unless you think it’s okay to choose friends on appearance alone…

You need to have a goddamn bio.

A few little bits and bobs to finish off The Big Study this week. I mentioned in the last post that I had a few more data points I wanted to tease out, mostly regarding age.

My first point was a bit surprising – does Tinder want me to be a cougar?

More than 50% of profiles shown to me were aged in their twenties. I’ve been looking to see if I can find some solid demographic data – to see if it’s just reflecting the age of users, however the only stats I can find break it down in to large groups, like age 25-34. Anyway, it’s always flattering once you’re in your dotage to know that plenty of men in their twenties still look at a woman of your age as a viable option, and not just a candidate for the nursing home. I just found it odd the relative dearth of men the app seemed to be showing that were my own age. 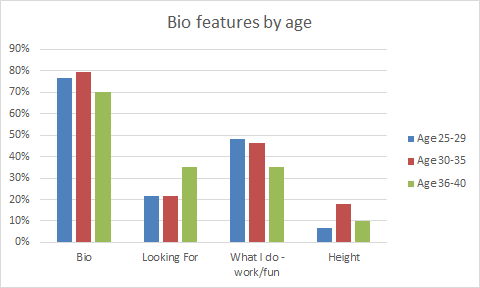 Breaking down the bio features stats by age revealed that they were really pretty close. I was wondering if the data was going to surprise on the ‘looking for’ front, but it didn’t. Men who have had a little more time on the earth have a better idea of what they’re looking for, and are more inclined to tell the world. Where they seem to be a little more shy is adding information about themselves, with the 25-29 age group having the best showing here. As stated in the last post, the height factor wasn’t really much of a ‘thing’ – about 15% of all profiles listed it – but the 30-35 age group was more than twice as likely as the 25-29 age group to list their height.

Moving on to photos, rather than looking at each photo type as a percentage of all photos, I also wanted to see how each was represented by percentage of profiles. I think faces are kind of important, so I was very pleased to see over 90% of profiles have at least one photo where the subject’s face can be seen in full. I am vaguely astounded that only 40% of profiles have a travel photo – I have used the app on and off since the study and they are absolutely still a mainstay.

Alright, no-one’s surprised that the 25-29 year olds are dominating the meme game, nor that the 30-35 year olds have maybe had the best opportunities to travel. Nope, the biggest surprise was the 36-40 year olds having the highest average number of gym selfies. Older dudes be taking care of themselves, and they’re not afraid for you to know it.

I hope you’ve enjoyed this series of blog posts looking at Tinder from a data analysis perspective. I’m shortly starting a new role so I’ll have to turn my Huge Nerd Brain to other, less frivolous things for a while. I have a couple of pieces that will by published off-blog in coming weeks, but Victorian Values will return in some non-Tinder-y form. If you’ve got any suggestions for subjects that you think are under-sassed and under-charted, please send them my way!